Snow cover in the Alps remains very impressive for early April, with upper base depths still in excess of 5m in a number of locations, including Flaine (where weathertoski has been this week). Snow quality, however, is highly variable, as you would expect in spring.

Many places did enjoy some fresh snow on Thursday, but with temperatures expected to rocket on Friday, only the highest north-facing slopes (above 2800-3000m) will hold on to any “cold powder” by the weekend.

It will then turn more unsettled again later on Sunday and early next week, but any significant snow will be localised with high resorts close to the French-Italian border (e.g. Val d’Isère, Sestriere) and the south-western Swiss-Italian border (e.g. Zermatt) most likely to benefit.

Across the pond, the resorts of western Canada continue to offer better snow conditions than those in the western US…

There was some new snow today across the higher Austrian resorts but lower down it fell as rain, meaning that the pistes are very wet in the likes of Saalbach (50/145cm) despite good snow coverage.

For much better snow quality you need to head to the highest ski areas, such as Obergurgl (95/210cm) and Hintertux (165/375cm), where the snow remains “wintry” (at least up top).

The weekend will be mostly warm and sunny with relatively fine weather continuing into the first part of next week. 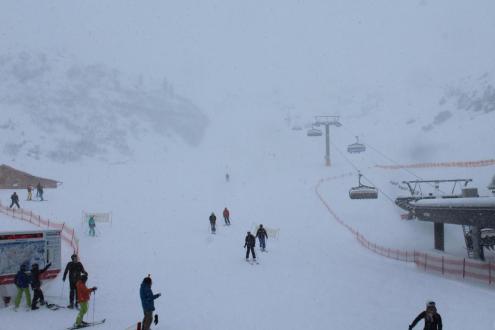 There was some fresh snow to enjoy across many French ski resorts today, but temperatures are on the rise again, meaning that altitude will be the key to the best snow conditions over the next few days. Val Thorens (269/370cm) and Tignes (226/355cm) will be as good as any.

Lower down, resorts such as Les Gets (60/270cm) will still be able to offer some decent piste skiing, but it will just turn slushier earlier in the day.

After a warm and mostly fine start to the weekend, it will turn more unsettled on Sunday and early next week with the chance of some significant snow in resorts close to the Italian border, from Val d’Isère southwards. 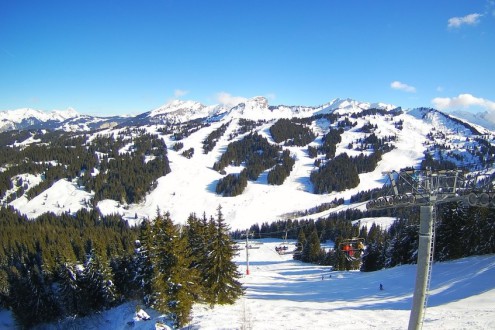 There is still excellent cover across most Italian resorts, however, snow quality is quite inconsistent and will become even more variable over the next couple of days (especially lower down) thanks to rising temperatures.

High altitude Cervinia (60/400cm) is among the best bets right now, with more snow forecast later in the weekend and early next week. Another good bet is Livigno (96/181cm). However, even these resorts will not be immune to some slush on their lower slopes later in the day. 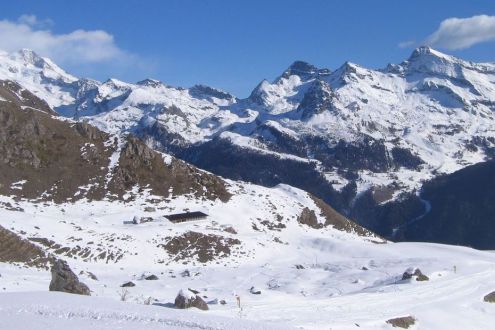 There is still excellent snow cover across most Swiss resorts, though with temperatures on the rise it is the higher ones such as Zermatt (20/400cm) and Saas-Fee (130/300cm) that will offer the best conditions over the coming days. These two resorts (close to the Italian border) may even see some significant new snow early next week.

Lower down, there will still be some good piste skiing on offer in resorts such as Champéry (100/350cm) and Wengen (15/190cm), but it will just turn slushier here earlier in the day.

All five Scottish ski areas have good cover and, thanks to fresh snow, are offering some great early April skiing. The most impressive base depths are to be found in Glencoe (190/310cm).

There is also plenty of good skiing still on offer in Norway, where most resorts have had an excellent season. Right now, the western resort of Voss has base depths of 90/275cm. 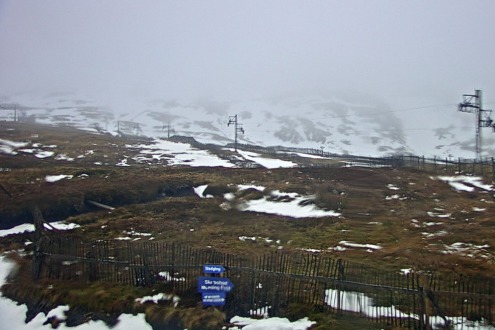 Above average snow cover still in the Pyrenees. This is Cauterets – 5 April 2018 – Photo: cauterets.com

Most western US resorts haven’t seen a huge amount of snow in the last week but, on-piste at least, there is still some enjoyable skiing to be had.

Colorado’s Breckenridge currently has upper base depths of 145cm, while Utah’s Alta has 236cm. Both resorts can expect some new snow over the next few days though it won’t be cold, so rain is possible at lower elevations, especially in Utah.

In general, snow conditions in the resorts of western Canada are superior to the resorts of the western US. Whistler (299cm upper base) is expecting more snow over the next few days though it may fall as rain at village level.

Further inland, there is also some excellent skiing on offer in the Banff/Lake Louise area (182/244cm), with flurries also forecast here over the next few days. 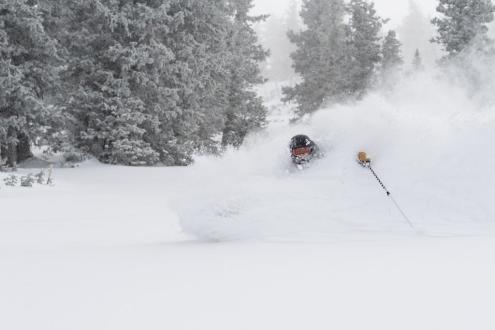 Our next full snow report will be on Thursday 12 April 2018,