The weather may have caused havoc in the Alps in places this week but, generally speaking, snow cover remains very impressive with some excellent skiing in prospect once things calm down.

The bulk of the new snow has fallen in the northern half of the Alps – i.e. the French Alps roughly north of Grenoble (e.g. Val d’Isère, Courchevel, Flaine, Chamonix, Avoriaz), most of Switzerland away from the far south (e.g. Verbier, Mürren, Engelberg, Klosters), a good part of Austria (e.g. St Anton, Kaprun) and some north-western parts of Italy, especially close the French and Swiss border (e.g. Courmayeur).

By the end of the weekend some of these areas will have seen seven day storm totals close to 2m, at least at altitude. There has also been some rain lower down, although nothing too serious yet, but it may become more of an issue later on Sunday and Monday. The bigger problem so far has been the wind, seriously disrupting lift operations (especially at altitude) in the western Alps (e.g. Zermatt, Val d’Isère), and leaving the off-piste situation particularly precarious.

It should be noted that not everywhere has seen such wild weather this week. The south-eastern Alps (e.g. Dolomites), the far southern French and south-western Italian Alps (e.g. Isola 2000 and Prato Nevoso) have actually had plenty of fine weather.

Across the pond, snow conditions continue to be more favourable in western Canada than in the western US…

Snow cover is impressive across most of the Austrian Alps, especially at altitude in the west where St Anton now has 80/300cm and Obergurgl has 105/275cm.

Most of the recent snow has been in the north and west of the country, but that’s not to say that you can’t still find some excellent skiing further south. Nassfeld (55/105cm), for example, has been offering some fabulous piste skiing in recent days, not least because the weather has been more clement.

The forecast is very mixed over the next few days with further snow for many but also some rain lower down, especially later in the weekend and on Monday. 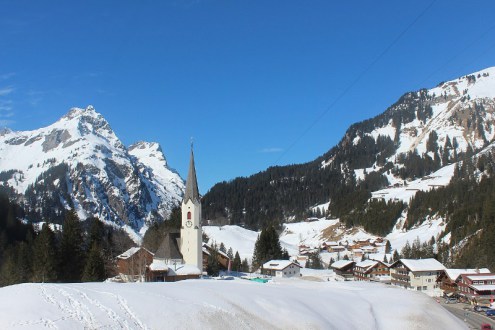 Mixed weather this afternoon in the northern Austrian Alps. This is Leogang – 18 January 2018 – Photo: foto-webcam.eu

It has been another very wild week in the French Alps with further heavy snow contributing to some truly massive base depths now at altitude in the north. Flaine now has 140/380cm depending on altitude, while Val Thorens has 225/240cm and Les Arcs has 120/330cm.

Lower down, the relatively mild temperatures (and some rain) means that snow depths are a bit more “normal” in the likes of Les Gets (60/170cm) but, above about 1300m, the snow pack is much deeper than average just above everywhere.

Watch out for some further bad weather over the weekend with a rising rain/snow level later on Sunday and Monday. 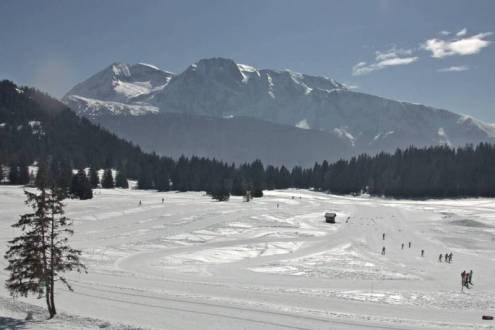 Snowing again in the Portes du Soleil today. This is Les Gets – 18 January 2018 – Photo: facebook.com/Lesgetsofficiel

Snow conditions are generally excellent across the Italian Alps though the weather conditions have been challenging at times this week, especially in the north-west. This is also where you will find the deepest snow, with base depths of 190/300cm in Cervinia and 110/240cm in Courmayeur.

However, while the weather remains unsettled, some of the best skiing can actually be found further east in the Dolomites. Here Cortina has 50/120cm of settled snow depending on altitude, while Alta Badia has 70/180cm. 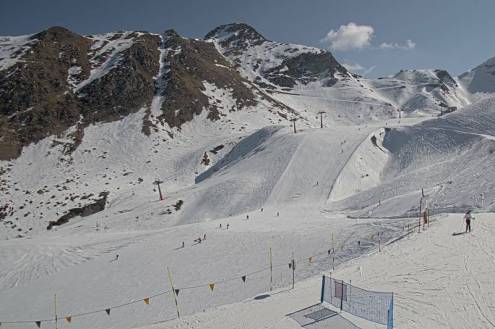 Plenty of snow in the streets of Champoluc – 18 January 2018 – Photo: Visitmonterosa.com

With the exception of some lower parts of the far northern Swiss Alps, snow cover remains impressive across most of Switzerland, even exceptional in the south-west where base depths are now 150/300cm in Zermatt and 80/270cm in Verbier.

Further north, there is a bigger gulf between top and bottom depths, as seen in both Wengen (5/180cm) and Engelberg (5/560cm), whose glacier has the deepest pisted base in the Alps.

Expect further snow in most regions over the next few days but with a rising rain/snow limit later in the weekend and into the first part of next week. 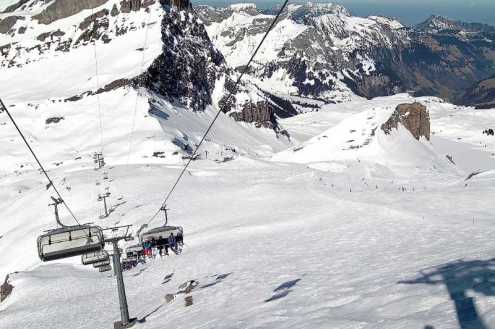 The Pyrenees have not seen a huge amount of snow recently but conditions remain pretty good, especially on-piste. Andorra’s Arcalis has base depths of 75/140cm while Spain’s Baqueira Beret has 124/180cm.

Scottish ski resorts have seen plenty of snow recently with some excellent conditions in prospect once the weather calms down. Glencoe has seen around 50cm of fresh with upper base depths now approaching 80cm.

Most Norwegian resorts have also seen fresh snow. Hemsedal, for example, has had 20cm and now has an upper base 120cm deep. 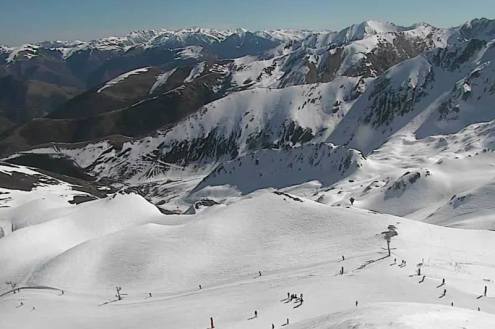 Beautiful skiing weather in the French Pyrenees. This is Cauterets – 18 January 2018 – Photo: cauterets.com

Snow depths are still considerably below par across most of Colorado and Utah. While the piste skiing may still be good here, it does mean that the off-piste is often still quite limited. Vail currently has upper depths of 79cm while Park City has 64cm. Snow is forecast for both states this weekend but only in moderate quantities.

Further north, Jackson Hole (135/190cm) has more impressive snow depths, still thanks to the big storms much earlier in the season.

It’s snowing again in Whistler (205cm upper base) and will continue to do so over the next days, with some really significant accumulations at altitude. At resort level a little rain could be mixed in at times, but overall the picture is a very positive one.

Further inland, any snowfall will be much lighter, but colder temperatures in the Banff area (130cm upper base) mean that skiing conditions here are also good, especially on-piste. 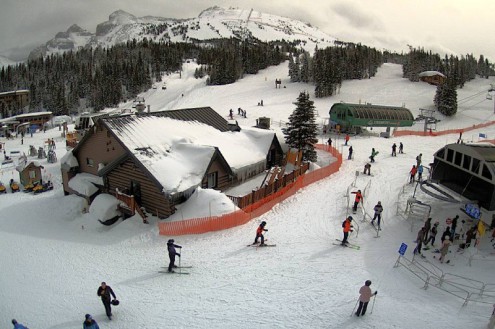 Our next full snow report will be on Monday 22 January 2018, but see Today in the Alps for regular updates