Welcome to our first detailed snow report of the 2019-20 ski season!

It probably hasn’t escaped your notice that there is already quite a bit of snow in the Alps. For the moment most of the skiing is still confined to the glaciers, even though it would actually be possible to open much more non-glacial terrain than is currently on offer. More non-glacial resorts are likely to consider capitalising on the early snow soon, especially at weekends, but many are likely to stick to their fixed opening dates for logistical reasons.

So how much snow is there in the Alps already?

The answer is quite a bit at altitude, but not an exceptional amount in the greater scheme of things - the snowline roughly starts at around 1200-1700m, with depths of around 30-70cm at 2500m and 60-120cm above 3000m. There are no stand-out regions yet, and the snowiest resorts are quite geographically diverse. Take France’s Serre Chevalier and Italy’s Arabba, for example, which both have lots of snow but are at opposite ends of the southern Alps.

As to the next few days, the weather in the Alps is set to stay cold with significant snow likely across the southern Alps, especially in Italy, but also spilling a bit further north at times into southern Switzerland, southern Austrian and parts of France closest to the Italian border.

For more details on how things are stacking up so far, check out our country by country round-up below…

The heaviest snow in Austria has, in recent days, fallen at altitude close to the Italian border, where  Sölden (106cm upper snow base) for instance is offering 38km of runs (some non-glacial) and is in superb shape right now.

Nearby Obergurgl (45/95cm) also has lots of snow and will open most of its entirely non-glacial area this Thursday. Further north and east, Hintertux and Kaprun are two other good options though, in general, the northern Austrian Alps (e.g. Kaprun) currently have less snow than the south.

The forecast for the week ahead is for the weather to remain on the cold side with further snow at times, heaviest in areas close to the Italian border, such as Obergurgl and Nassfeld. 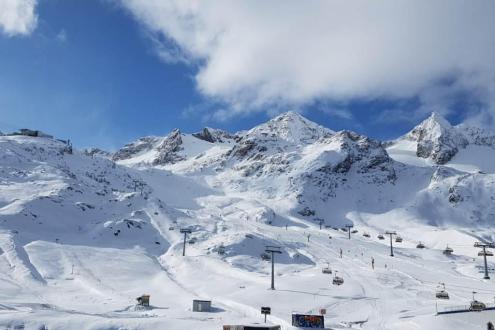 Most French ski resorts now have good snow cover even if Tignes remains the only one open for lift-served skiing for now, with 50cm on its glacier and more to come later this week.

Elsewhere in France some of the deepest snow is currently to be found in Les 2 Alpes and Serre Chevalier, neither of which are open yet but which both report over 1m of level snow higher up. Val Thorens is also looking in good shape ahead of its scheduled opening on 23 November.

The weather is forecast to stay cold this week, with bits and pieces of snow, heaviest later in the week in the southern Alps as well as close to the French/Italian border. 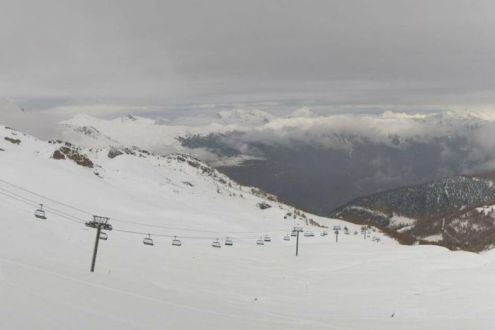 Most Italian ski resorts have seen significant snow in recent days, especially in the central and eastern Italian Alps.

The Dolomites are looking particularly good right now with significant natural snow backed up by the world’s best snow-making, which will ensure an excellent start to season later this month.

A bit further west in Lombardy, Livigno is also looking very snowy right now and has opened some pistes this weekend well ahead of its official opening on 30 November. However, for the greatest extent of skiing available on a daily basis, you should head to Cervinia (20/130cm) where 7 runs are currently open and more are expected to follow suit soon.

The Italian Alps are expected to see lots of new snow this week, especially later in the week. 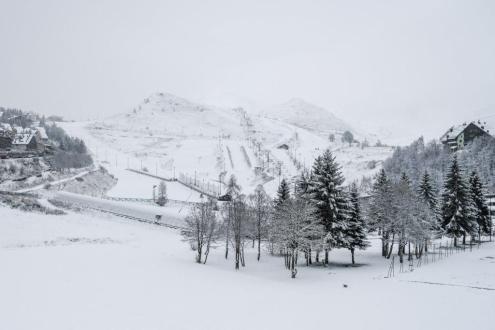 Looking wintry in the far south-western Italian Alps with more snow to come this week. This is Prato Nevoso – 11 November 2019 – Photo: pratonevoso.com

Most Swiss ski resorts already have a decent amount of snow at altitude, with several resorts already open daily. These include Zermatt (8/70cm) and Saas-Fee (20/50cm) where you can already ski below the glacier to the middle station at Morenia.

You can also ski on a very limited basis at Glacier 3000 near Les Diablerets and on the Diavolezza glacier near St Moritz, with other openings across the Swiss Alps expected soon.

Further snow is forecast at times this week, mostly close to the Italian border and favouring resorts such as Zermatt, Saas-Fee and St Moritz. 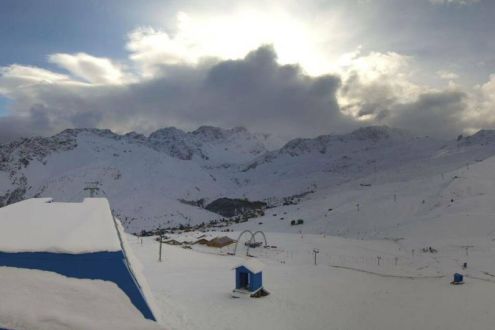 Most of the Pyrenees currently have lots of snow with even more in the forecast. Although nothing is officially open yet, some resorts will no doubt soon make the effort to fire up a few lifts soon.

Most importantly though the big resorts are virtually already assured of a good start to the season.

Our next full snow report will be on Thursday 14 November 2019,