Within this flow, a weak cold front will reach the north-western Alps on Saturday, but will give no more than a dusting of snow above 1200-1500m across the northern French and western Swiss Alps.

Later on Sunday, a more active storm will arrive from the north-west which will deliver significant snow, mostly to the northern half of the Alps, between Sunday night and Tuesday. The winds will also turn more northerly, dragging increasingly cold air down across the Alps.

Earlier in the week we had mentioned that this storm might produce widespread significant snow across the Alps, but recent weather model updates suggest that this will be mostly (though not entirely) a northern Alpine event – i.e. roughly affecting the French Alps north of Les 2 Alpes, the Swiss Alps (with the exception of Ticino) and the Austrian Alps (with the exception of Osttirol and Carinthia). All these areas should see significant snow by Tuesday.

After a relatively mild weekend, it will also turn colder on Sunday night with the rain/snow limit starting at around 1500m on Sunday evening but lowering to 600m or below by Monday.

From the middle of next week onwards high pressure should return, ensuring a settled end to next week… 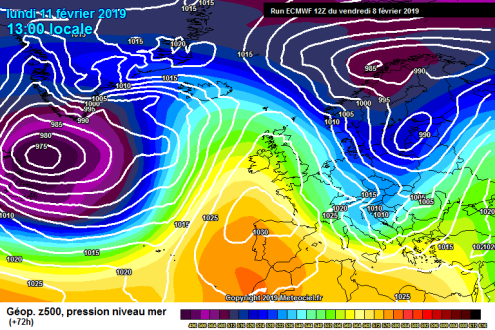 Saturday will be mostly dry in the Austrian Alps with sunny spells, the best of which will be in the south. It will be quite mild with freezing levels typically around 1500m.

Sunday will again be mostly dry with sunny spells, however cloud will thicken up in the west later with snow likely in the Vorarlberg and western Tirol by evening (first above 1500m, lowering overnight).

Monday will be mostly cloudy with frequent flurries or longer spells of snow to very low levels. However, Osttirol and Carinthia may stay mostly dry with occasional sunny spells.

Saturday will start cloudy in the northern French Alps, with a little light snow (1200m) in places (e.g. Portes du Soleil). However, the further south you are the more likely it is to be drier and brighter, and sunny spells should extend to all areas later in the day.

Sunday will see snow quickly moving into the northern French Alps, falling above 1300-1500m to start with but lowering to 600m or so by evening. Any precipitation will be lighter roughly south of Grenoble, with the far southern Alps perhaps staying dry.

Monday will be colder and mostly cloudy across the northern Alps, with snow showers to very low levels, perhaps dying away later. The southern Alps will see fewer flurries and more in the way of sunshine.

Saturday will be mostly dry in the Italian Alps, with sunny spells and freezing levels between 1500m and 2000m.

Sunday will start dry, but some showers or longer spells of snow (1000-1400m) are likely later in the day, especially close to the northern border areas.

Monday will be colder but mostly bright, with just a few flurries close to some of the northern border areas.

Saturday will start mostly cloudy in the northern Swiss Alps with a few early showers (snow 1000-1200m), though these will die away later. Elsewhere it will be mostly dry with the best of any sunshine in the south.

Sunday may start dry but snow (1500m) will soon reach the western Swiss Alps, spreading further east as the day progresses. It will also turn colder, with the rain/snow limit descending to 600-1000m by evening. The far southern Swiss Alps may escape with a mostly dry day.

Monday will be cold with frequent snow showers to low levels in the central and northern Swiss Alps. The far south may again stay dry with some sunny spells expected.

Snow showers will linger across the north-eastern Alps on Tuesday (i.e. Austria), before all areas become dry and bright for the second half of next week.

Our next detailed snow forecast will be on Tuesday 12 February 2019, but see Today in the Alps for daily updates