The weather in the Alps remains unsettled, with a succession of weather fronts moving down from the north or north-west over the next few days. The first of these is a cold front, which will arrive tomorrow bringing snow to many northern parts of the Alps. This will be heaviest in Switzerland and Austria, but a bit lighter in the northern French Alps.

Following this, a strong “northern Stau” (or ‘blockage’) will set in, meaning further almost continuous snow (and high winds) on Wednesday across the northern Alps, including most of Austria (but not Osttirol and Carinthia), most of Switzerland (away from the far south, especially Ticino) and the French Savoies.

On Thursday the snow showers will become more confined to the north-east (i.e. Austria) before they die away later in the day.

The heaviest snow from the next storm cycle is likely to fall in the far west of Austria, with 70-100cm possible by Thursday in the Austrian Vorarlberg and western Tirol (e.g. at altitude in Warth, Lech and St Anton).

Many other parts of the northern Alps will see between 20cm and 60cm of new snow over the next 72 hours, with Switzerland and Austria more favoured than France. The Portes du Soleil might see 20-30cm in places, but don’t expect more than 5-15cm in the mega resorts of the Tarentaise such as Val d’Isère.

On Friday and over the weekend, yet more weather fronts will pile in from the north or north-west. However, as there will be some warm sectors in the mix, the rain/snow limit is likely to rise to 600m or higher in places by Saturday. Watch this space…

Tuesday will be mostly cloudy in the Austrian Alps, with outbreaks of snow above 500-800m. These will be heavy at times, especially in the northern and western Austrian Alps, but patchier south of the main Alpine ridge, with some brighter spells possible in Osttirol and Carinthia.

Wednesday will remain mostly cloudy with further snow showers, heavy and prolonged in places, with the snow-line descending into the lowlands again. The far south will escape the heaviest of any precipitation and may see some brighter spells.

Thursday will be cold with further flurries in many places, the heaviest of these to the east of Innsbruck. 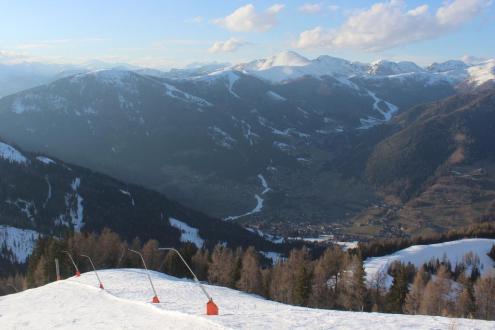 A rare glimpse of blue sky in the Austrian Vorarlberg, but the snow will return tomorrow. This is Schröcken – 7 January 2019 – Photo: warth-schroecken.at

Tuesday will be cloudy across the northern French Alps with some light to moderate snow (above 600-800m) reaching the Haute-Savoie during the morning, spreading further south as the day progresses but losing its intensity. The southern French Alps (roughly south of Grenoble) will stay mostly dry, with plenty of sunshine in the far south close to the Mediterranean.

Wednesday will see further snow showers to low levels in the northern Alps. These will generally be fairly light, but possibly quite heavy in the northern foothills close to Lake Geneva and the Swiss border. The further south you are, the lighter and patchier any snow will become, with plenty of dry fine weather in the southern French Alps.

Thursday will remain cold. Any early cloud in the northern French Alps should break up leaving most areas with plenty of sunshine.

Thursday should see the last of any light flurries move away from the Austrian border areas then everywhere will be dry with sunny spells, though still cold.

Tuesday will be mostly cloudy in the Swiss Alps, with outbreaks of snow (above 500-800m). These will be heaviest in the north (e.g. Engelberg, Laax), but lighter and patchier in the far south, especially in Ticino which may hold on to some sunny spells.

Wednesday will see further snow showers to low levels, heavy and prolonged at times in the north and east, but lighter further west and in the south, with parts of Ticino again staying dry.

Thursday will be cold with a few flurries lingering in the east (e.g. Klosters, Flumserberg). Otherwise it should brighten up with some sunshine in most other areas.

It will remain unsettled on Friday and over the weekend with further snow, mostly across the northern half of the Alps. It will also be milder for a time, but not seriously so.

Our next detailed snow forecast will be on Friday 11 January 2019, but see Today in the Alps for daily updates