The weather in the Alps is rather unsettled right now and will remain so for the foreseeable future.

Most of any snow this week will fall on Wednesday. It will then turn milder on Thursday and Friday with just a few showers here and there, mostly in the French and western Italian Alps, with a rain/snow limit rising towards 2000m. The weekend will then be mild with a mixture of rain and snow in the southern Alps.

Early next week it will turn colder again, with the heaviest precipitation moving back towards the north-western Alps.

On Wednesday, the northern and western Austrian Alps (e.g. St Anton, Saalbach) will see showers or longer periods of snow (700-1100m). Further south and east it will start dry with sunny spells, but some showers are also likely here later.

Thursday will be mostly dry with sunny spells. It will also be milder with freezing levels reaching 1400-1800m.

Apart from the odd shower in the far west (snow 1800m), Friday will also be dry and mild, but rather cloudy.

Wednesday will see plenty of cloud and some showers in the French Alps, heaviest and most frequent in the north later in the day (snow 600-900m). The far southern Alps will be drier with sunny spells.

Thursday will be feel milder than Wednesday, and will remain mostly dry with sunny spells in the north, while cloud cover will be thicker in the south, bringing a few showers (snow 1800m).

Friday will see variable cloud cover and a few showers here and there, mostly in the south (snow 1600-2000m). The best of any brightness will be in the more internal valleys of the northern Alps.

Wednesday will see showers (snow 700-1200m) in most areas of the Italian Alps though the southern Piedmont may stay dry and mostly sunny.

Thursday will be mostly dry with sunny spells, though it will be cloudier in the south-west (e.g. Sestriere) with the odd shower (snow 1400m).

Friday will again be mostly dry with sunny spells and just the odd shower, mostly in the far south-west. It will feel milder with freezing levels approaching or surpassing 2000m. 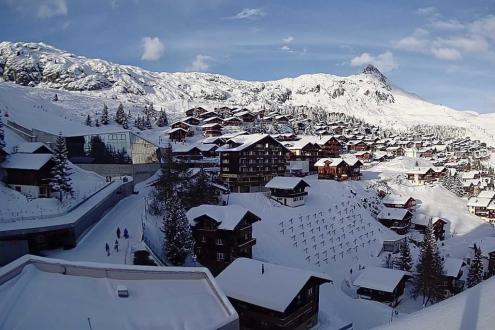 Rather cloudy across most of the Alps on Tuesday. This is Madonna di Campiglio – 6 March 2018 –Photo: funiviecampiglio.it

Wednesday will be rather cloudy in the Swiss Alps with showers, heaviest in the north and west later in the day with snow above 700-1000m. The far south will see the best of any brightness.

Thursday will be mostly dry with variable cloud and sunny spells, especially in the south. It will also be a little milder with freezing levels between 1400m and 1800m.

Friday will be mostly dry and mild with variable cloud and just the odd isolated shower (snow 1900m).

The weekend will be mild and mostly cloudy in the southern and western Alps with some rain or snow at times (snow 1800-2400m). The northern and eastern Alps will be drier with more in the way of sunshine.

Our next detailed snow forecast will be on Friday 9 March 2018, but see Today in the Alps for daily updates