The weather in the Alps will remain relatively cold and unsettled this week, with further storms moving in from the west or north-west.

These storms will deliver the heaviest snow to the western Alps (i.e. France) at first, but later in the week there will also be some significant snow the southern Alps, including the Dolomites, which have been left somewhat behind in recent weeks.

Further snow is then likely across most parts of the Alps over the weekend, meaning that anyone skiing in the Alps next week could be in for some exceptionally good conditions. Watch this space…

Wednesday will be mostly dry in the Austrian Alps with variable cloud, some sunny spells and just the odd light flurry here and there. It will be chilly though, with freezing levels generally under 600m.

Thursday will be similar to Wednesday, with variable cloud and chilly temperatures, although it is expected to remain dry in all regions.

Friday will be mostly dry and bright, but breezy (due to the Foehn) in the northern Austrian Alps. Cloud amounts will increase the further south you are, with snow expected to low levels in Carinthia and Ostirol. This will extend into parts of the Tirol and Vorarlberg later. 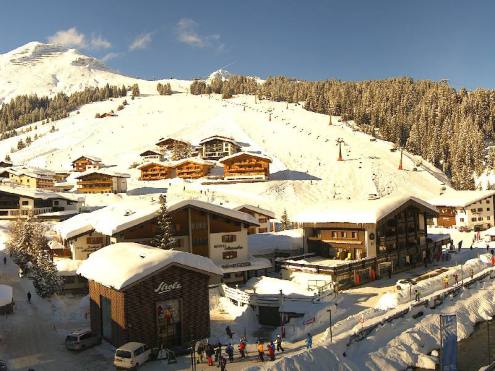 Sunny in Lech this afternoon but it will generally be a changeable week in the Austrian Vorarlberg – 29 January 2019 – Photo: lech.com

Wednesday will see some early snow (400m) in the French Alps. This will be heaviest in the north but will die away as the day progresses.

Thursday will start dry in most places, but cloud will tend to increase with some showers or longer spells of rain/snow later in the day, heaviest in the south (e.g. Isola 2000). Some internal valleys, such as Chamonix or the Tarentaise, may stay dry for much of the day. The rain/snow limit will generally be between 600-800m, but perhaps as high as 1200m in the western foothills.

Friday will be mostly cloudy, with snow (700-1100m) for many, heaviest in the southern French Alps.

Wednesday will be mostly cloudy in the Italian Alps, with occasional snow flurries (to low levels) here and there but also some sunshine, the best of this in the south-west (e.g. Sestriere) later in the day.

Thursday should start bright or sunny in the western Italian Alps, but cloud will increase with snow likely (to relatively low levels) later in the day. Further east (e.g. Dolomites) there will variable cloud amounts all day, with just a few flurries here and there.

Friday will see more widespread snow across the Italian Alps, heaviest in the east (e.g. Dolomites) with a rain/snow limit between 800m and 1300m.

Wednesday will be mostly cloudy in the Swiss Alps, with some snow to low levels, most of which will fall in the west (e.g. Portes du Soleil), but will die out later. Further east, there will be a few flurries but also some sunny spells, especially later on in the day.

Thursday will be mostly dry but breezy (Foehn) across the central and northern Swiss Alps with sunny spells and just the odd/shower flurry. Later in the day, however, more snow is likely to fall more generally (to low levels) in the south (close to the Italian border), spreading a bit further north overnight.

Friday will see a period of snow in the west and south (e.g. Champéry, Zermatt), with a rain/snow limit generally between 400m and 800m. Protected by the Foehn, the northern and eastern Swiss Alps may be drier, with sunny spells at times. 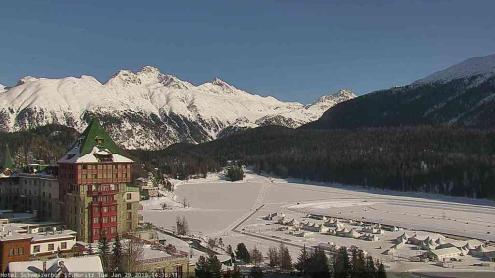 Sunny skies in St Moritz, but there will be some snow at times later in the week – 29 January 2019 – Photo: engadin.stmoritz.ch

This weekend will remain on the cold side, with further snow at times, probably heaviest in the northern Alps. Stay tuned for updates…

Our next detailed snow forecast will be on Friday 1 February 2019, but see Today in the Alps for daily updates