The weather in the Alps will remain changeable over the next few days, but any snow (on any given day) will be relatively modest and relatively localised. Really catching our eye are the predicted temperatures, which are set to plunge dramatically around the middle of next week.

So this is an early warning for anyone skiing in the Alps next week - it will become very cold, especially from mid-week onwards. This will also be exacerbated by a biting east or north-easterly wind. Temperatures at high altitude could drop to -20°C or lower, and that’s before windchill has even been added to the equation. Wrap up warm! 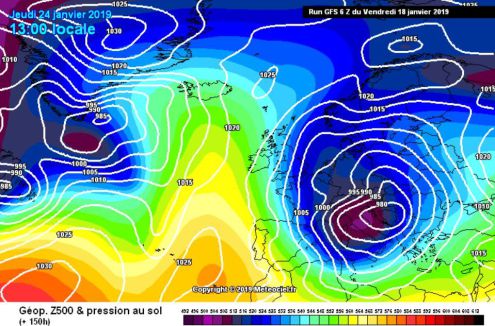 Saturday, Sunday and Monday should be mostly dry in the Austrian Alps, with variable cloud and some good sunny spells, the best of which will be in the west on Saturday, but further east on Sunday. It will be relatively cold with freezing levels generally between 400m and 900m.

Saturday will be mostly dry with sunny spells in the French Alps, although cloud may increase from the west later. A few flurries also cannot be ruled out from the far south late in the day. Freezing levels should be around 1000m.

On Sunday, a weak weather front may graze the French Alps bringing a little snow here and there, but there is still a lot of uncertainty over this.

Monday should be dry with sunny spells but feeling on the cold side.

Saturday will be dry in the Italian Alps, with sunny spells for most. However, the far south-west (e.g. Limone) may pick up a few flurries later.

Sunday and Monday will remain mostly dry with sunny spells, and freezing levels typically between 700m and 1200m.

Saturday will be mostly dry in the Swiss Alps, with sunny spells and freezing levels typically around 1000m.

Sunday will be cloudier in the north with the chance of the odd flurry, but most places will remain dry with sunny spells.

The weather will remain mostly fine on Monday, but it will also start to feel colder.

The weather in the Alps is set to get colder as next week progresses, becoming very cold from mid-week onwards.

Detail on snowfall is hard to pin down at this stage, but any significant snow is most likely to fall in the southern Alps mid-week, before moving increasingly further north later in the week. Watch this space…

Our next detailed snow forecast will be on Tuesday 22 January 2019, but see Today in the Alps for daily updates