The weather in the Alps remains very unsettled, with several new fronts moving down from the north or north-west over the next few days. The first of these has already reached the northern foothills of the Alps this evening and will deliver a light to moderate fall of snow to some northern parts of the Alps tonight.

After another short lull, more active fronts will arrive later on Saturday night and Sunday, bringing much heavier snow to the northern Alps which will last into Monday. It will also become very windy.

Between now and Monday night we can expect 40-90cm of new snow quite widely across Austria (away from the far south) and the central-northern and eastern Swiss Alps (e.g. Engelberg, Klosters).  Some favoured spots of western Austria (e.g. Lech-Zürs, Warth-Schröcken, St Anton) may even see 100-150cm of new snow at altitude.

Northern French and western Swiss ski resorts (e.g. Avoriaz, Flaine, Villars, Verbier, Mürren) will see between 30cm and 60cm, although figures may be more modest in the more internal resorts of the Tarentaise (such as the 3 Valleys and L’Espace Killy) where they are more likely to see in the region of 15-30cm by Monday evening.

Bits and pieces of snow will also get through to the southern Alps, where Cervinia and Livigno (for example) could both see around 20cm, but most of the southern Alps (e.g. Sestriere and the Dolomites) will see very little if any snow from this latest round of storms.

As for the rain/snow limit during the latest storm, it will creep up towards 1000m for a time close to the northern edge of the Alps but will always be lower in the more internal valleys. It will then return to low levels everywhere later on Sunday and on Monday. 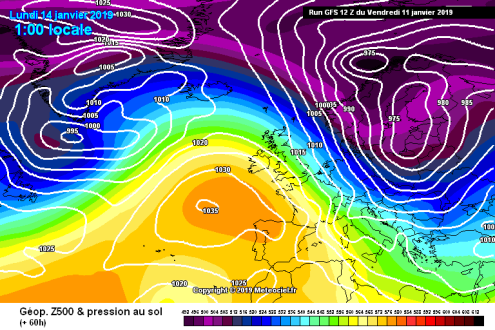 Another vigorous northerly blast will bring further heavy snow to the northern Alps on Sunday and Monday – Image: meteociel.fr, 11 January 2019

Saturday will see a lot of cloud in the Austrian Alps, with the best of any sunny spells in the far south. Some light snow showers (400-700m) are likely in the northern Austrian Alps early on in the day, but these should move away leaving a mostly dry day.

On Saturday night and into Sunday, more persistent precipitation will reach much of Austria, with only Carinthia and parts of Osttirol again missing out. The rain/snow limit will sit between 700m and 1000m, meaning that some rain is possible in the lower resorts.

On Sunday night and into Monday the precipitation will intensify, and it will turn colder again, meaning the return of heavy snow to the lower valleys. 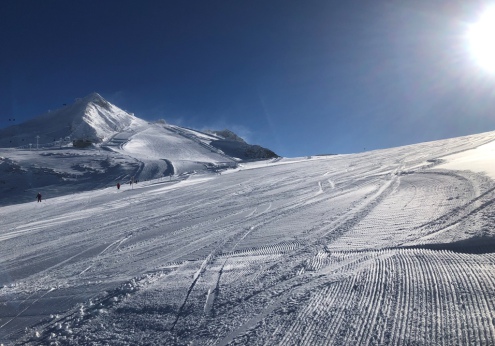 Saturday will be mostly dry in the French Alps, with variable cloud and some sunny spells.

On Saturday night and Sunday, an area of rain/snow will arrive from the north, but it will only really affect the northern half of the Alps (mostly the Savoies) with a rain/snow limit somewhere between 700m and 1000m, perhaps a touch higher across some exposed foothills. The southern French Alps will stay mostly dry with the best of any sunshine closest to the Mediterranean.

Monday will see early snow showers (500-700m) in the northern French Alps dying out with some sunny periods possible later. The southern French Alps will be dry and bright, or even sunny all day.

Saturday will be mostly dry in the Italian Alps, with some cloud close to the border regions, but also some sunny spells.

Sunday will see more in the way of cloud, especially in the border regions with western Austria, Switzerland and the northern French Alps. There will even be some snow in places (e.g. Cervinia, Livigno) but any precipitation will generally be lighter and patchier than in the northern Alps and some places will stay dry.

Monday will again see some cloud and the risk of flurries close to the border areas (with western Austria, Switzerland and the northern French Alps) but most places will be dry with sunny spells.

Saturday will see variable cloud in the Swiss Alps, with the odd early flurry in the far north-east. Otherwise it will be mostly dry with the best of any sun in the Valais.

On Saturday night, snow (600-900m) will arrive from the north-west to affect most parts, and will last into Sunday. The snow will be patchier in the south, but only parts of Ticino will escape completely.

Sunday night will see further heavy snow for the central and northern Swiss Alps lasting into Monday morning before it slowly dies away from the west. The rain/snow limit will lower again to between 400m and 600m.

The weather looks like it will settle down on Tuesday and Wednesday before further (relatively weak) weather fronts return from the north-west on Thursday.

Our next detailed snow forecast will be on Tuesday 15 January 2019, but see Today in the Alps for daily updates